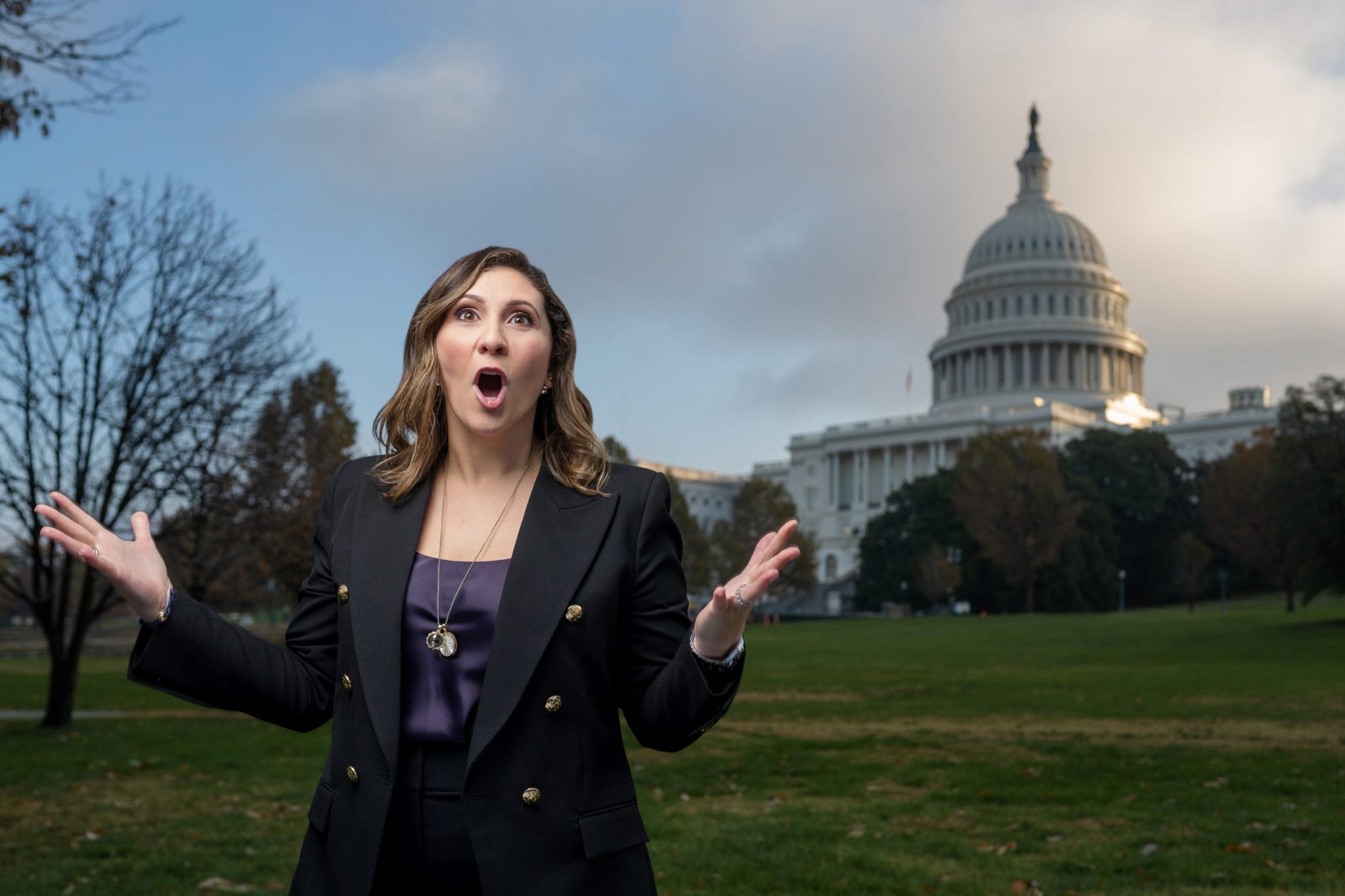 Hagar Hajjar Chemali is host, writer and producer of Oh My World on YouTube, a weekly series on world news, politics and more. Prior to launching her own show, she spent years working in the White House as the Director for Syria and Lebanon at the National Security Council, at the Treasury Department as a Senior Policy Advisor on Asia, as Middle East Policy Advisor in the Office of Terrorist Financing and Financial Crime, as Director of Communications and Spokesperson for the U.S. Mission to the UN, and as Spokesperson for Terrorism and Finance Intelligence at the U.S. Department of the Treasury.

She left her career in the U.S. government to start her own consulting and media firm in Greenwich, CT, where she lives with her family. A few years ago, for several reasons, she decided to shift directions again and started her own brand and show. The biggest reason? Motherhood. Hagar has three kids—two boys, 8 and 5.5, and a girl who just turned 1.

We spoke to Hagar about how she pivoted her career over the years, and most recently, how she launched her own show. She also shares the career-changing advice Gretchen Carlson gave her, how she plans to encourage her own little girl to follow her dreams, and more.

You spent years working in the White House and in government. Why did you decide to leave that world and open your own consulting firm?

Oh, I loved working for the U.S. government and I would love to go back one day. I left ultimately because the lifestyle of working in these types of jobs (which are truly 24/7) wasn’t the lifestyle I really wanted with young children. At the time I knew I wanted to work in media but it wasn’t exactly a jump that made total sense – I needed to go from A to B, rather than A to C. So, I opened my consulting business and did foreign policy analysis for the major networks on the side.

How did you decide to create the show?

The “aha” moment I had to create my own show was following a lunch I had with my good friend and amazing mentor Gretchen Carlson. She basically sat me down and highlighted to me how I was doing all this foreign policy analysis for the networks and wasn’t getting paid for it (did I mention those gigs are usually unpaid…yeah…), and she gave me a kick in the pants and said it was high-time I ask to get paid (as women often shy away from).

That’s when the wheels started to turn…as I thought about becoming a paid contributor for the cable networks, it just didn’t feel as worthwhile to me as having my own show on a digital platform, where the masses live. That was in April 2019. From there, I started thinking about a concept and honed it along the way. 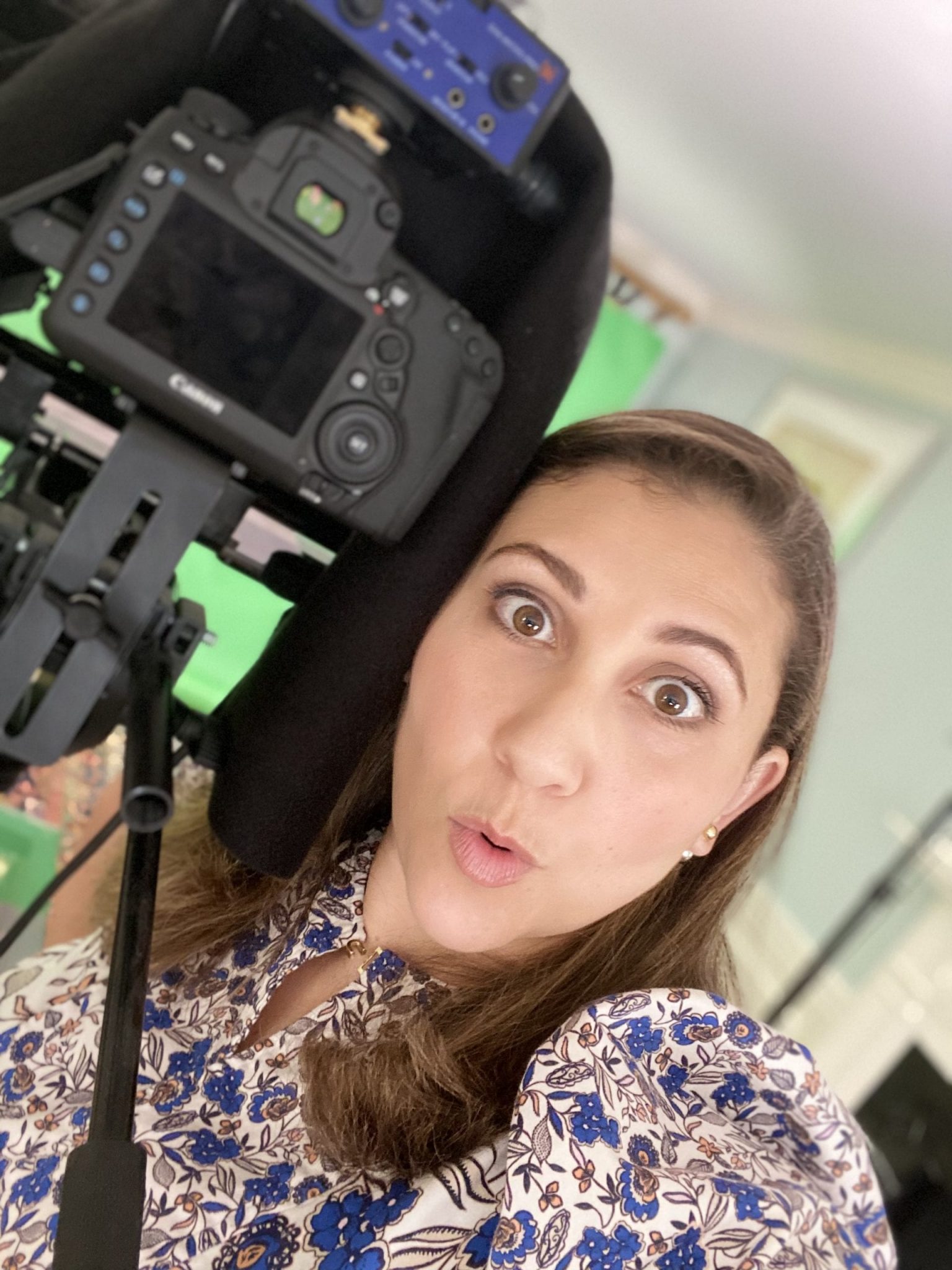 Where did the title Oh My World come from?

I love this question! No one really ever asks me about the title. The original title I wanted was What in The World? But I when I worked with lawyers to trademark the name, they found others who were using it in the same industry – ha, one of whom happened to be a friend of mine! So, I made a list of potential names, often pulling expressions where I could replace a word with “world” and Oh My World was born!

What is your goal with the show?

I have two goals – first and foremost, I want people to see that foreign policy and global events are super interesting and they matter more to our daily lives than you’d think. And I try to achieve this by presenting the information in a fun and easy way. Foreign policy is almost always discussed in kind of an elitist, dry, and even snooty way, and I think that turns people off. While my show targets a young American – Gen Z and millennial – I find Americans of all ages are quite interested in global affairs, they just want it explained in a way that makes sense!

The second goal – and this is going to sound pie in the sky so bear with me – is that I am truly trying to affect change for the better and I believe in the power of communications to do that. It’s why I have a Shit List, where I work to expose the activities of dictators and human rights abusers around the world, and a Crush List, where I share stories of those doing good around the world. Those elements are an incredibly important part of my brand.

What strategies did you use to pivot your focus?

One of my favorite things to do when I have an idea – any idea – is to reach out to a wide range of people – some could just be friends who are great at listening and others might be contacts who have a relevant background or connection – and I talk about the idea with them. I want to know what they think, their honest opinion, perhaps they have some feedback to help hone the idea or some advice, or perhaps they have another person to connect me to. I talk and talk and talk about the idea, until it becomes clear it’s a good one (or I change it to make it a good one) and until I have a sense of how to go about achieving it.

Then I put a plan in place – who else do I need to talk to, what do I need to do to get the wheels in motion, what’s the budget, etc. The planning – even when you really don’t have the relevant experience – can be a lot of fun, actually. It feels overwhelming but once you start talking to people and looking at others who may have done similar things, you start to get an idea of what you need to do. Listen to your gut to identify what you love, and then talk to everyone to help you get there.

Do you ever doubt yourself? If so, how do you get past that?

Oh of course! I don’t think I would be a woman if I didn’t doubt myself, unfortunately. And I’m a pretty confident person, but I definitely have moments of self-doubt or the dreaded imposter syndrome.

My husband is definitely a good sounding board to remind me when I’m being unfair or hard on myself. He will consistently show me how I might undervalue myself. It’s hard to be your own mirror sometimes. But when I do have moments of self-doubt, I find that talking to my cheerleaders and also looking back at moments of success, even if they’re small, helps remind me that I’m on to something and that I just need to keep plugging along.

I would say there has been no endeavor of mine that has given me more self-doubt than launching my brand and YouTube channel. There are times I feel the momentum, and then there are other times I wonder, is anyone watching this? Bueller?? But when I get one friend or stranger who tells me how much they love it and to keep doing it, it’s as good as if I hear it from thousands of people. It means the world, and those affirmations keep me going on the slow days as well.

We love your social media content – your videos, particularly with your kids and your dad, are amazing. What is the key to creating engaging content?

I have to say that I love that I’m being asked this question because I feel like I am the farthest thing from the expert on this! But I’ve learned A LOT along the way, and I am MORE THAN HAPPY to share anything I’ve picked up. The good news is that ANYONE can learn this skill.

Ultimately, being as authentic as possible on social media is critical – it’s what the viewer looks for and it helps them feel like they know the real you. So that means being unapologetically and unabashedly yourself. So, for example, don’t be afraid of looking like a total goofball when you dance around with your kids and your Dad (who by the way, is totally my secret weapon since he’s just so damn funny).

Also, know your goals and your audience. I would say this is the most important thing in any brand – whether it’s a business or a social media page. Through my social media, I want to entertain people, I want to make people feel like they know me, and I want to advertise my brand. And those objectives will typically dictate my posts. 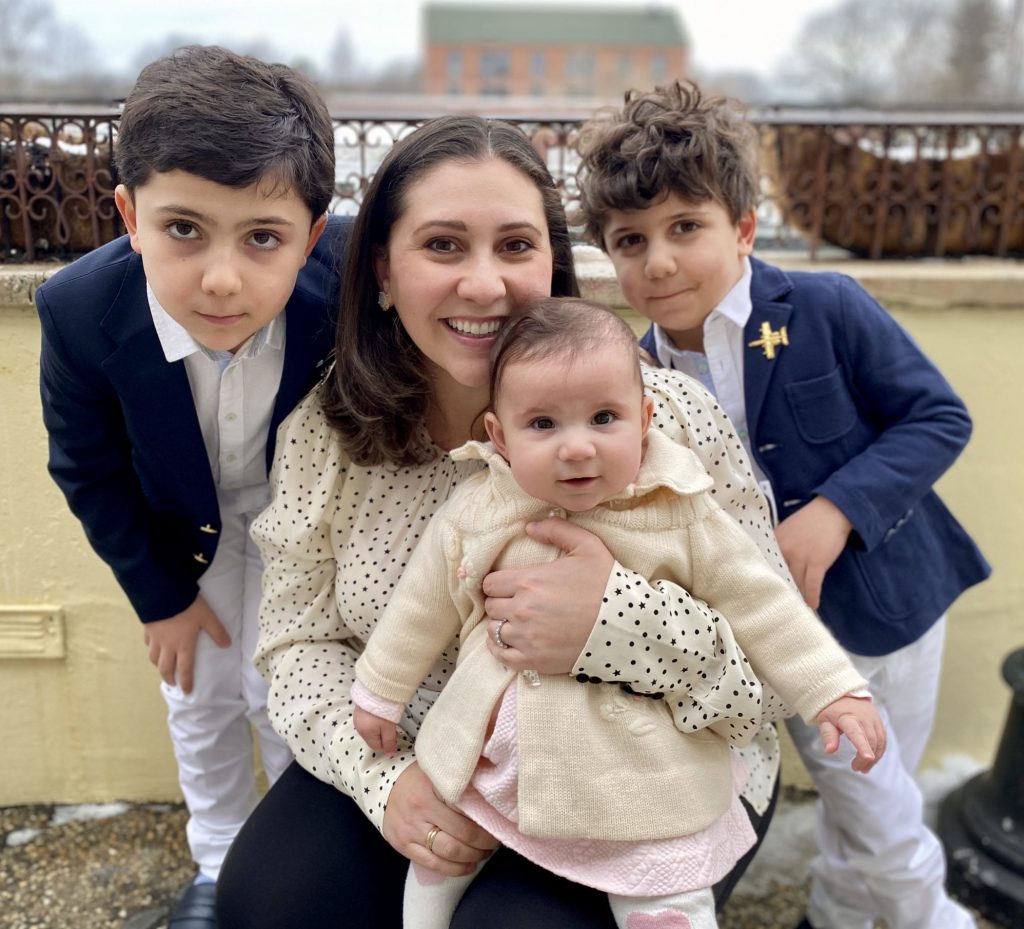 How has being a mom impacted decisions you’ve made regarding your career?

Oh, so much. Ha, I love to think of myself as a boss lady, but the kids end up being the real bosses, right? I left government when my second boy was born, in part because I knew how difficult it would be to do a job like the one I had (which was literally 24/7) with a toddler and baby. And instead of pursuing a full-time network position, I started my own consulting business and did foreign policy commentating for the networks, which allowed me a ton of flexibility and a lot of agency over my own schedule, which in the end is everything – having flexibility is what has allowed me to run after my career.

I will say that launching my brand and YouTube channel (when I was 8 months pregnant) was way more work than I appreciated and it has taken a life of its own, which is amazing! But the flexibility is still built in – for example, one of the advantages to buying the equipment and taping at my house is the amazing flexibility it gives me with young children and a baby, in particular. And that was the plan before the pandemic hit so it turned out to work in my favor!

You have added a little girl to your pack recently – what are you going to tell her about being a woman, working in male-dominated industries and following her dreams?

Oh, I’m so excited to pump her up and be her cheerleader. I’ll always remind her that she’s gonna crush it so that she feels a sense of self-confidence. I’ll tell her what my mom told me – that women are naturally smarter (ha, well she did!) – and that women are the catch. I’ll tell her she can do whatever she wants and achieve whatever goal she wants, so long as she works hard and puts her mind to it. And I’ll tell her what my dad told me – which was that I would be successful no matter what I did. And finally, I’ll tell her that when she’s faced with a mansplainer (which has happened to me on live TV NUMEROUS times), to not be afraid to speak up and show the room just how fabulous she is. In the end, it boils down to confidence and continuously fueling that confidence (with a dash of humility and gratitude, of course).

Awesome! What’s next for you?

For the first time, I really don’t know! Launching my brand and hosting a show was a huge goal for me – truly a lifelong dream. But I don’t think this is the peak! I’m looking forward to building further on my brand by expanding the team in order to pursue additional efforts like live events at universities and colleges and possibly a podcast, among other initiatives. The sky is the limit!

There is no room for failure when you have the maj